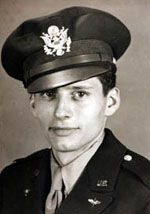 Irving W. Baum was born in Pittsburgh, Pennsylvania on March 3, 1923. During his early childhood his family moved to Queens, New York where he grew up and attended school.

He studied Chemical Engineering at Pratt Institute, Brooklyn, NY before enlisting in the Army Air Corps Cadets in 1942. Upon receiving his commission he served as Navigator on B17s in the European Theater of War. He flew bombing missions with the 8th and 15th Air Force out of England and Italy. He was shot down over Wiener Neustadt, Austria while on a raid out of Foggia, Italy. He spent a year as a prisoner of war in camps near Musgau, Sagan, Moosburg and Nuremberg. He was liberated by General George Patton in 1945.

After he was discharged, he decided to go into Land Surveying. In 1946 he married Ellen Rose Mayer in Elmhurst, NY and moved to Westchester County where he worked as a surveyor until he was recalled to active duty with the Air Force during the Korean Conflict. He first flew with MATS (Military Air Transport Service) out of Westover AFB, Massachusetts. Later he served as Munitions Officer at Lages Air Force Base, Terceira, Azores until he was caught in a RIF (Reduction in Force). He and his family decided to reside in the nearby town of Praia for another year while he worked for an American firm surveying on Lages AFB.

After his return to the United States he moved west to Redlands, California, where he worked for a small engineering company. Upon becoming a licensed Land Surveyor he was hired by the State of California in 1955. Most of his 38 years of service was spent with CALTRANS San Bernardino in the Design, Right-of-Way Engineering and Surveys departments, working on the state and interstate freeway system. From 1965 to 1973 he was assigned to the State Water Resources Department in Los Angeles, working on the Feather River Project which brought northern water to southern California. He retired as Supervising Land Surveyor in December 1993.

Irv was an amateur radio operator and, under call sign KB6LA, participated in the California Blood Bank Society and other emergency agency nets, as well as in special events, which required the services of ham operators.

An Eagle Scout in his youth, he became an outdoor leader for the Girl Scouts of America. He led scout troops on day hikes and backpacking trips into the San Gorgonio and San Jacinto Wilderness Areas and taught astronomy during Senior Scout jamborees.