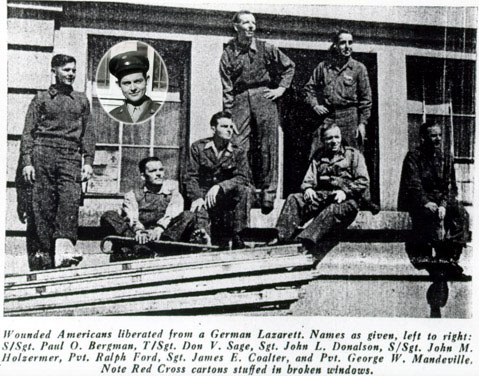 My name is Paul Bergman; I was the radioman on a B-24 bomber attached to the 93rd BG, 409th BS. We were shot down October 9, 1944 over Dawelshausen, Germany, and liberated April 5, 1945. For the entire time I was under a Hospital or Rehab environment due to broken feet and leg. I missed being sent on a forced march due to my leg cast always getting damaged. “It always got damaged at the same spot, where the pull date was”. When it was repaired the technician always put a later date to remove the cast then was on it originally. I weighed 195lbs when I was shot down and only weighed 127lbs with a full leg cast when I was liberated.

I came home, recuperated and went about my life until the year 1994 when I was forwarded a letter by the 93rd BG Assoc. from a German Researcher who was researching my Aircraft crash. This particular letter motivated me to follow-up and find the other surviving four crew members and discover what happenes to the five crewmembers (KIA).

With the help of the National Archives, MACR reports, KU reports, German researcher and a personal letter from a German civilian who saw me jump out of my Aircraft, I now know the fate of how all five of the men that were (KIA). I am now in contact with the three remaining POW crewmembers and also with the wife of my Pilot.

The picture above was taken on Liberation Day by the Red Cross and printed in their June 1945 POW Bulletin, and me as of January 1999.