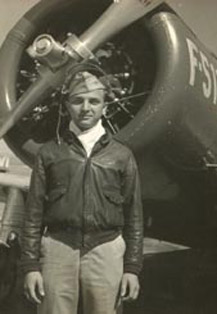 His B26 was damaged on its first mission which resulted in a crash landing in the Netherlands. Jim and Crew tried to escape but were immediately captured by the Germans.

Jim was interned at Stalag Luft III near Sagan Germany for 2 ˝ years until shortly before the end of the war when his camp was evacuated for a forced march to Stalag 7A at Mooseburg Germany.

While interned in camp, he was a member of the Escape Committee, forged papers for escapees, and was a code-user “C.U.”, sending and receiving coded messages for Military Intelligence. This “CU” was a top-secret operation and was not declassified until the early 1980's.

Jim was liberated near the end of the war April 29, 1945. On return to the U.S. he pursued a career in banking and rose to President and CEO of the National Bank of Blacksburg, Blacksburg, Virginia. Jim retired in 1983 and he and Jean moved to Clearwater Florida. In addition to pursuing his hobbies Jim was active in the American EX-Prisoners of War and was Treasurer of the Dept. of Florida AX-POW Organization..

Jim’s hobbies were flying, metal & woodworking. As a Member of the EAA (Experimental Aircraft Association), he personally built and flew a “Starduster-Too” (open cockpit bi-plane with 180 HP engine, fully aerobatic). He was also a pilot in the Civil Air Patrol.

My Message to Future Generations: Read history, learn from it, and apply it to the future.