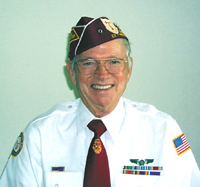 Purple Heart awarded for multiple wounds suffered on the 8th Air Force first Bremen Raid over Germany, April 17th, 1943. The 306th lost 41% of its ships on that mission. Air Medal Awarded for shooting down a German ME109 on Lorient Raid. POW Medal awarded as a POW at Stalags 7-A and 17-B in Austria.)

In May of 1943 escaped from prison train with Bob Hansen. Managed to get out of train but got tangled in barbed wire fence near RR tracks. Pulled clear while guards were shooting at us. Lost trousers and shorts in wire. Walked at night (no pants, etc) for 3 nights. Two soldiers spotted us early on 3rd morning. But I stuck bare leg in air, Bob jumped on top of me, and I giggled like a girl. Soldiers thought we were boy & girl. They joked & laughed. Little did they know. We got away for another 11 days. No food, hungry and weak. Were caught trying to cross bridge. Spent 3 months in deep solitary and Sunderbarrakie (Detention Camp). Suffered severe body sores, lice, fleas, etc....While in solitary couldn't pass water more than once a day, in trough where they fed me potato (or bread) and tea twice a day. Sent me to 7-A where later I got into the Punjab's Compound. They hid me out (They worked in the fields) and fed me fresh vegetables. In six weeks was healthy again and returned to American Compound, Later to Stalag 17-B for another year. Then the walk across Austria and liberated on May 5, 1945. Greatest day was when we heard U.S. successful invasions. We knew then that in time (a year later) we would be free!

My Message to Future Generations: Be thankfull that you are alive and take advantage by living life to its fullest potential. Help others live it better with encouragement and a smile.